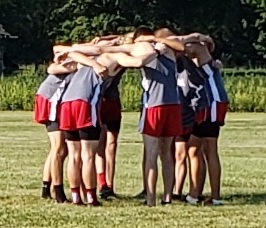 Jets cross country ran in the Bi-County Conditioner yesterday. The team is split up into pairs for this race and run relay-style. Each runner completes three one mile loops. The total time for the first three pairs of runners is used for each team’s score.

The team of Arnold and Connelley paced the Jets on the day with combined three-mile times of 18:16 and 18:15 respectfully. Both took off a minute from the cumulative three-mile times last year. The team of Terrell and Steele crossed the finish line next. Terrell’s total time on the day was 18:44 and Steel’s was 18:52. McAfee and Schwartz finished the day with total times of 20:24 and 22:25. Shoaf and Ausland’s total times were 20:35 and 23:20. Ausland and Schwartz had to fight through injury and illness during the race. Logan Clark could not compete due to an injury. The Jets team score was over two minutes faster than last year.

The Jets compete in the Marion Invite this Saturday. Spectators are not allowed to attend due to a large number of runners competing.

Note: scores are listed in hours, minutes, seconds, and tenths of a second without any colons due to the limitations of the software used.